My Twitter feed recently reassured me that there is good in the world, and that good will eventually triumph over the bad and the stupid, no matter how baked-in the stupid may be.

That’s what happened when a picture of tampon cookies appeared on my screen. The cookies were larger than life-size and the judges on the “British Baking Show” would have quibbled about the lack of consistency, but they were anatomically correct, right down to the string attached to each and the hints of bright red frosting.

My friend’s 7th grader goes to a school where the kids organized for free tampons in the bathroom. The male principle said no because they would “abuse the privilege.” The kids decided to stage a cookie protest. Behold the tampon cookies! 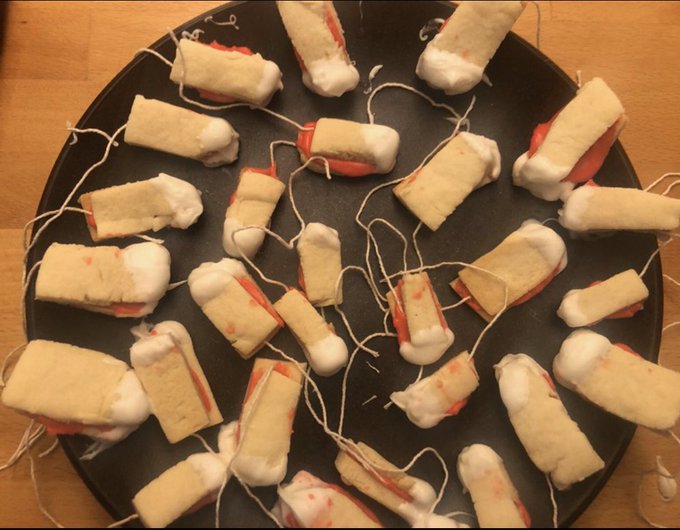 Ilyse Hogue, who also happens to be the president of NARAL, posted the image. She wrote: “My friend’s 7th grader goes to a school where the kids organized for free tampons in the bathroom. The male principal said no because they would ‘abuse the privilege.’ The kids decided to stage a cookie protest. Behold the tampon cookies!”

Maybe he thought girls would steal tampons to sell them on the black market. Or perhaps he suspected they would hoard the tampons so they could save their allowance to buy drugs. Ibuprofen, for example.

Since when are tampons a privilege?

I retweeted the tampon cookies and later that day got an email that sums up how much and how fast things are changing on the menstrual front:

I was at CVS the other day, wandering the aisles for “feminine products” hoping I wouldn’t bump into a colleague. It reminded me of how embarrassed I used to be about buying tampons, how I still (still!) hide one deep in a sweater pocket on the way to the restroom. The action of these 12-year-olds is really something … totally unthinkable when I was in 7th grade.

We are in the midst of a sea change in the image and even the experience of menstruation, thanks to a generation of girls who are growing up with much more information, thanks to moms and the internet, where cheerful gynecologists explain everything, including how to insert a tampon. (Raise your hand if you remember your first time doing that, all alone in the bathroom with nothing but a confusing package insert for guidance.)

With more information there is less shame. And shamelessness gets you guerrilla bakers and the Girl Scout troupe in an Ohio school that petitioned the district for a “hygiene locker” in the bathroom. When they were turned down, the Scouts used their own money (from cookie sales) and built it themselves. As one of the girls said, “The world would never change if we accepted every no.”

It’s not all about cookies. Sarah Groustra wrote an opinion piece for her Brookline High School newspaper about menstrual stigma and argued that period supplies belonged in the school bathroom along with paper towels and toilet paper, which are equally necessary, but free.

Her article inspired a local legislator, Rebecca Stone, to propose making tampons free in all public restrooms in town; the measure passed and machines are being installed. Similar measures have been introduced in cities, counties, and states all over the U.S.

Menstrual justice is more than making products available for everyone who needs them. Products alone can’t undo the damage done by millennia of misinformation, silence, stigma and shame that are attached to the healthy functioning of half the human race. But there is something undeniably powerful about having them out in the open.

During a recent trip to the bathroom at the Peabody Essex Museum in Salem, I went to the bathroom, where I encountered baskets of free pads and tampons. It made me so happy, I actually took pictures of them.

Is the museum foolish to invite the potential “abuse of the privilege?” Or is it a harbinger of a new, better normal on its way?

(I am also working on a book about menstruation in collaboration with The Pad Project, producers of the Oscar-winning short documentary, “Period. End of Sentence.”)